Nolan Transportation Group (NTG) has been named a 2016 Pacesetter by the Atlanta Business Chronicle for the fifth time, ranking number 7 out of 100.

The ABC Pacesetter Awards are given to Atlanta’s fastest-growing privately held companies who are setting the pace for business in metro Atlanta. Ranking criteria includes review of two-year growth in company revenue from 2013 to 2015, as well as employee growth from 2013 to 2015.

NTG is headquartered in metro Atlanta area, with two additional locations just miles away from HQ. NTG provides third-party logistical services for over 5,000 customers across the United States, Canada and Mexico. “We can continue to grab market share because there is so much out there,” said Founder & Executive Chairman Kevin Nolan. “Everything moves on a truck at some point, even if it goes on rail, air, or ocean when it is going to its final destination, it usually has to go on wheels. The differentiator in this business is service.”

Nolan adds that recruiting the right people makes all the difference in the success of the company. NTG hires two training classes per year, conducting a formal training week in Atlanta, GA. Each class learns the tools and knowledge necessary to have a rewarding career in logistics. “Our leadership team is extremely involved in every aspect of the business and our employees set the bar very high for every training class that comes in,” said Nolan. “NTG’s high-energy, collaborative office culture is contagious once you walk into any of our 12 locations. Our people are at the core of NTG.”

NTG Helps Drivers Get Home for the Holidays 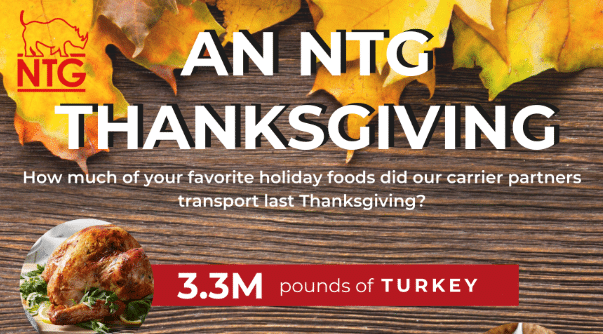 An NTG Thanksgiving – By The Numbers

Are you ready to Take Charge?

Are You Ready To

Get a Carrier Rep